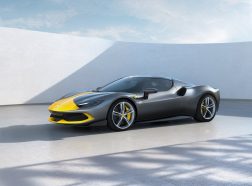 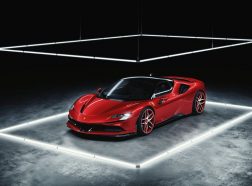 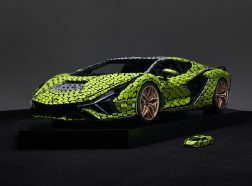 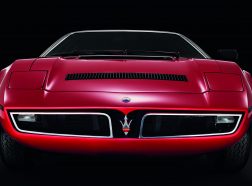 The Concours of Elegance – famed for gathering together the rarest cars ever created – will showcase some of the world’s finest Ferraris at Hampton Court Palace in this year’s ‘Main Concours’ display. Taking place from 3-5 September, the event is renowned as one of the top three concours d’elegance events in the world for the […]

The Ferrari SF90 Stradale Assetto Fiorano has set the fastest lap recorded by a production car at the 2.439-mile Indianapolis Motor Speedway road course, lapping the circuit at an impressive 1:29.625 seconds at a maximum speed of 174.6 mph to set this time. “It was a great moment to witness, seeing how the impressive performance […]

Maserati and Hiroshi Fujiwara, the Japanese godfather of street culture, come together for a partnership that crosses geographical and disciplinary borders into the unexplored territories of audacity, in a realm beyond which music is embodied in the form of a car and rule-breaking is allowed. Born from this collaboration and presented in an exclusive global […]

The 812 Competizione, the new limited-edition special series car derived from the 812 Superfast, was presented today to media, clients and fans all over the world. In the course of the event, which was broadcast live on Ferrari’s social media channels, the wraps were also whipped off the 812 Competizione A, a spectacular Targa-top version, […]

The new Ferrari Portofino M is an impeccable companion for exploring the UK and Ireland’s most spectacular roads and rediscovering the British Isles’ hidden gems. ‘M’ stands for Modificata. The updated Portofino has subtle visual changes from its predecessor (which received one of the world’s most coveted design accolades, the Red Dot: Best of the […]

Motorsports in its genes, power rooted in the spirit of pure competition, unprecedented wins and unrivalled achievements, Maserati celebrates its racing past with F Tributo Special Edition. Maserati’s racing debut was exactly 95 years ago; it was on 25 April 1926 that the first racing car to bear the Trident on its bonnet, the Tipo26, won […]

The first official images of Ferrari’s latest limited-edition special series have been published in the build-up to its world première, which will be broadcast live on the Maranello marque’s social media channels on May 5 at 14:30 CEST. The new model is the ultimate expression of Ferrari’s concept of an extreme front-engined berlinetta, honing the […]

The Maserati Levante Hybrid is presented to the world in both a physical and digital World Premiere event. In fact, the dual nature of Maserati is shown at the Shanghai Auto Show for its live presentation, and, for the rest of the world, in a virtual launch event on the brand’s website (houseof.maserati.com). With the Brand’s first […]

Magnificent, unique and in the truest sense of the word super fast: with the Ferrari F8 Tributo, the Italian sports car manufacturer introduces the successor to the Ferrari 488. wheelsandmore presents its sporty, elegant tuning program for the current Tributo model from the house of Ferrari. No question: the 720 hp 3.9-liter turbo V8 engine […]